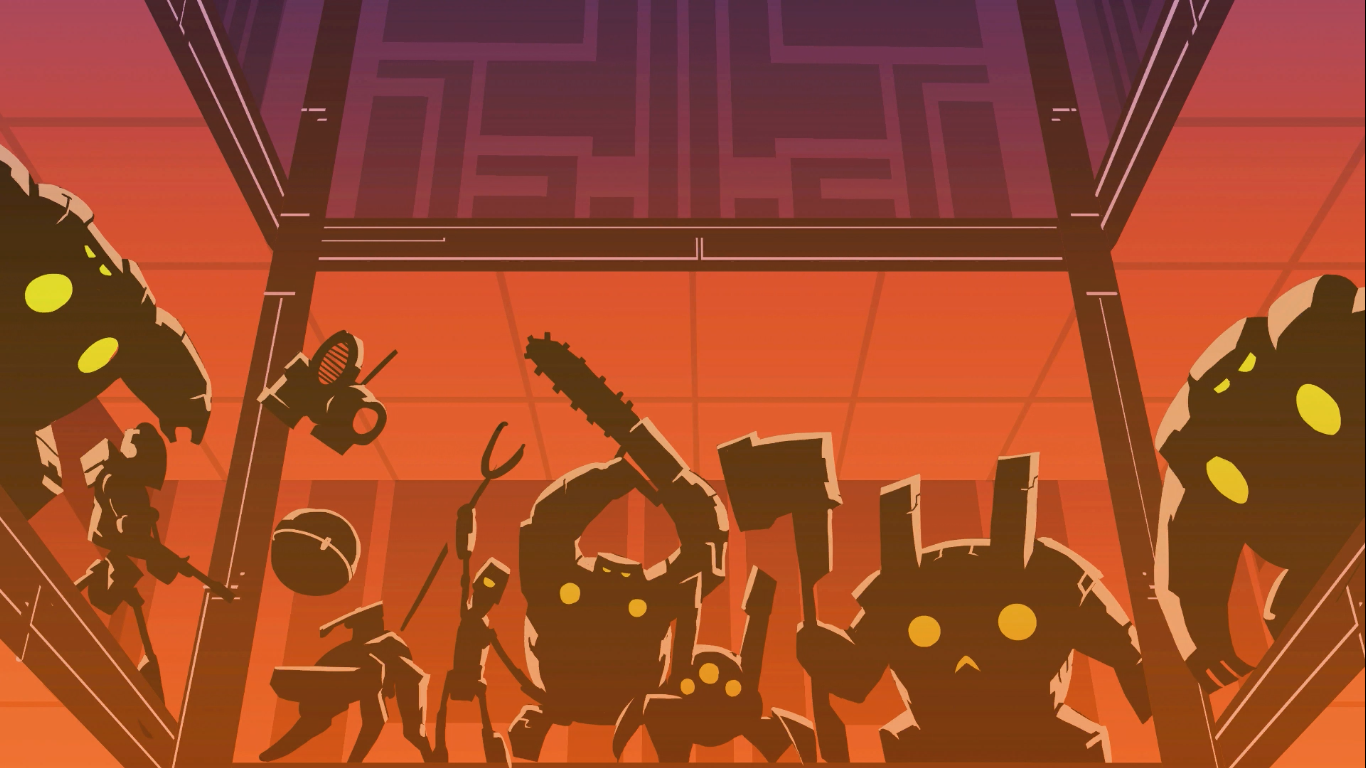 It’s post apocalypse robot bashing, crashing and dashing fun in Heart&Slash for just about everything but the Bandai WonderSwan. Seriously though, Heart&Slash is available on the Nintendo Switch, Xbox One, PC and the version that I’ll be reviewing is for the PS4.

Let’s get all the important information and good stuff out of the way. Heart&Slash is a 3D hack and slash brawler with a dose of rouge-like elements thrown in. You’ll be jumping, dodging and attacking with a large array of varied weaponry and armour, as you work through hoards of deadly robots looking to give you a fatal hardware update, usually involving a chainsaw.

Heart is the titular protagonist who, after waking up with some sort of robo-amnesia gets a message from creator Dr. Sympathetic, who promptly tells Heart to get moving because it’s not safe.

That’s it really, that’s the story. There’s a little more to find out but for the most part the story is minimal, just a dressing to get Heart to fight off the many enemies the game has to offer. So that’s what you’ll be doing a lot of, and all with a memorable (if limited) soundtrack and in charming

The combat is fast and a little repetitive at first. Most weapons have a strong and weak attack, with combos not lasting more than three hits or so. At first I was getting bored of hammering the groups of robots that would come blindly chasing after me, then I made it to the first boss and got demolished in short order. That’s where things started to get a little more interesting though. In a rouge-like it’s to be expected that you’re going to lose, probably often, but in Heart&Slash it’s not quite so bad. Firstly, Heart is a very fast robot, and the small levels mean you can shoot through them at real speed if you’re so inclined. However, defeating enemies gets you parts to upgrade yourself and your equipment, and that’s really going to help you tear through enemies. Then there’s the unlockable weapons that carry over every time you lose. So as you progress you’ll lose, but gain the chance at finding stronger equipment in future attempts, moreover, the more unlocked means more variety in gameplay, helping to fend off repetitiveness.

As an example, when I started my first two or three play-throughs only spawned melee weapons, swords and gloves mostly, but then I unlocked the shotgun. It’s a simply weapon that just lets you aim and fire, but having projectile with real force (it’s more like a cannon then a shotgun) that you can mix up with your sword slashes was a breath of fresh air. Then there was the plasma rifle, another projectile that allows first person aiming, completely different from anything I had used before that point. Now I’m not saying that these mechanics all work perfectly or anything, but the range of equipment in Heart&Slash, even it they’re functions are fairly limited, is very much welcome. On top of that, levels are randomly generated, so if you’re worried about multiple play-throughs of the same level, at least the layout and room content will vary. In fact, my one real grip about the gameplay is that it seemed at time that the quality of the weapons and armour that spawned was very important to how well I would do in that attempt, it’s not the whole story, this is a game is centred around you ability ultimately, but there are instances where you can find yourself at a very big advantage or disadvantage depending on you luck. There was also a few ropey moments with the camera at first, but honestly after a little time you’ll be used to it, with only minor irritations here and there.

I said above that the game is in a cel-shaded art style, and it works really well here. It not very graphically impressive, but like many games in the same style, the aesthetic appeal comes by stylistic considerations rather than a polygon count.

Most of what I’ve written so far has been positive right? Well you can move that to one side now because Heart&Slash has one very big problem; it’s broken, at least on the PS4.

Broken might be a little harsh, the game runs, however its stability is a major problem. To put it clearly, Heart&Slash has crashed regularly while I’ve been playing, and by regularly, I mean that roughly a third of all my play-throughs ended with a crash that ends the game, booting you out to the PS4’s menu. That rate of crashing is just not acceptable, and it’s not just me. After looking through some posts on internet forums, I discovered that this was a common experience among PS4 owners, though I can’t speak for other versions of the game.

What makes things even more frustrating is that, especially for a budget title, Heart&Slash has the makings of a really fun game with personality to spare. Seriously, it’s like you’ve just signed a wonderkid on a free transfer, then he breaks both his legs in the opening match of the season (a reference for the Football Managers out there).

So there you have it, Heart&Slash could be a good game, one of those that makes it’s way onto the hidden gem/undiscovered/under appreciated games lists that many of us are fond of, but it falls short thanks to its frankly inexcusable stability issues. There’s always hope that a patch will fix things, but this game came out about two years ago and it still has some terrible problems.

It’s a shame, but with a heavy heart I have to give Heart&Slash a 3 out of 10. I wrote that I can’t speak for Heart&Slash’s performance on other systems, so just be sure to do your homework if you plan on picking this one up.

For Stage – Select, this is Ed, signing off.