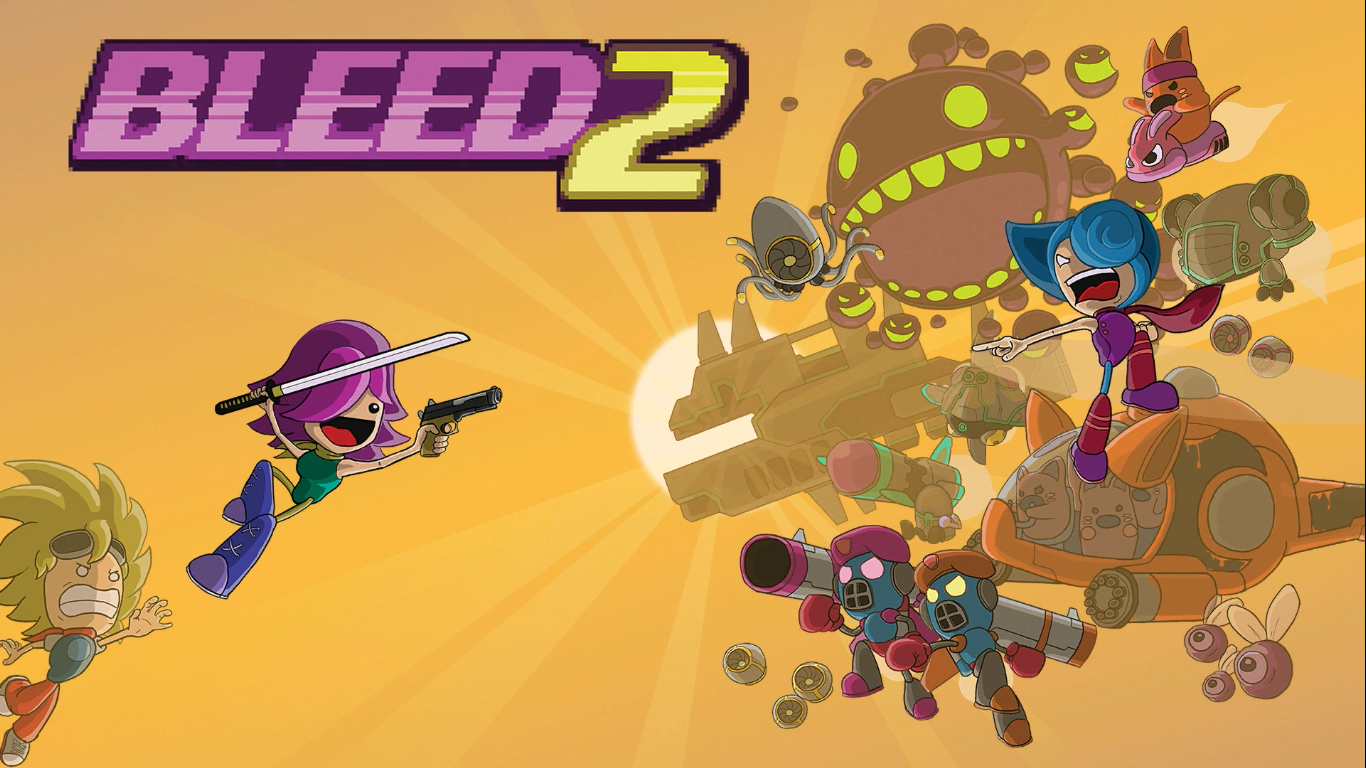 Welcome to the second part of my review for the Bleed Collection, and here I’ll be taking a look at Bleed 2, as well as giving my review score for the collection taken together.

I should start off just by saying that much of what’s true for Bleed is true for Bleed 2, so if you want to see how the two games stack up you can find the first review here.

So we’re back with the purple haired heroine Wryn, whose up again for another round of shooting and aerial dodges. The game takes place after the events of the first, where we find Wryn playing video games at home. Suddenly there’s a massive shock. The city is under attack from a huge force of aggressors, so it falls on Wryn to take the fight to them. If you’ve played the first game you’ll feel right at home with Bleed 2, but there’s some new twists in this game that improve things.

Wryn’s default weapon set up is now her duel pistols along with the kantana. Now her attack starts with a sword slash that is then followed up by a stream of bullets, that’s inclusion of the katana by default is important to the biggest change to gameplay in Bleed 2. Like in the first game the katana can deflect bullets, but you’ll notice that bullets now come in two colours, purple and yellow. Wryn can only deflect purple coloured bullets, and this simple change makes a big difference in gameplay. This comes coupled with a change in emphasis of stage construction in Bleed 2, with levels being more horizontal than in the previous game. With these changes I found myself spending more time on the ground bouncing back bullets than I did zipping through the air. The game stresses the importance of deflecting projectiles, and you’ll see that boss battles will be made a lot easier if you master this technique. That’s not to say that the aerial game is gone, just improved, with new kinds of dodge techniques to unlock. All of this leads to a more fun experience for me.

I enjoyed the gameplay of Bleed greatly, but with the added depth in Bleed 2, and moreover, the shift in focus to action over platforming leads to some more satisfying moments for me.

So the good from Bleed carries over to its sequel but so is the main bad, the length. Just as in the first, Bleed 2 can completed in an hour or so, depending on how much you lose of course (which will probably be a lot). However, just like the gameplay, Bleed 2 gives a little bit more to add to the game’s longevity. Not only do you have the same incentives as the first game to complete the game several times with unlockables to get, and there’s also the challenge mode and arcade mode, but Bleed 2 also introduces an endless mode. In this mode you’ll play through a selection of randomly generated levels so you can come back to Bleed with a differing playthrough each time. It’s still a short game, but with the inclusions you’ve got another reason to play a little more.

The art style for Bleed 2 had been given an upgrade, with sprites being a little larger, with more detail and levels more colourful, and even the level’s have improved looks with more details and activities in the background.

Bleed 2 is the classical idea of a good sequel and creator Ian Campbell deserves a lot of praise for that, it takes everything good about the first game and improves on it. On its own Bleed 2 is, like its predecessor, great fun, short (though it does better than Bleed thanks to the endless mode) and keeps the local co-op element.

On it’s own Bleed 2 scores a 7.5, but when taken as a package with the first game, the biggest issue of length is taken care of nicely. I give Bleed the collection 8 out of 10. Two good games in one very good collection.

Side note – Though I like to focus on the games, it’s always worth mentioning extras, and in the Bleed collection not only do you get two games, each with their own boxes for you shelf, you also get a complete soundtrack and stickers. Just one more reason to pick it up.