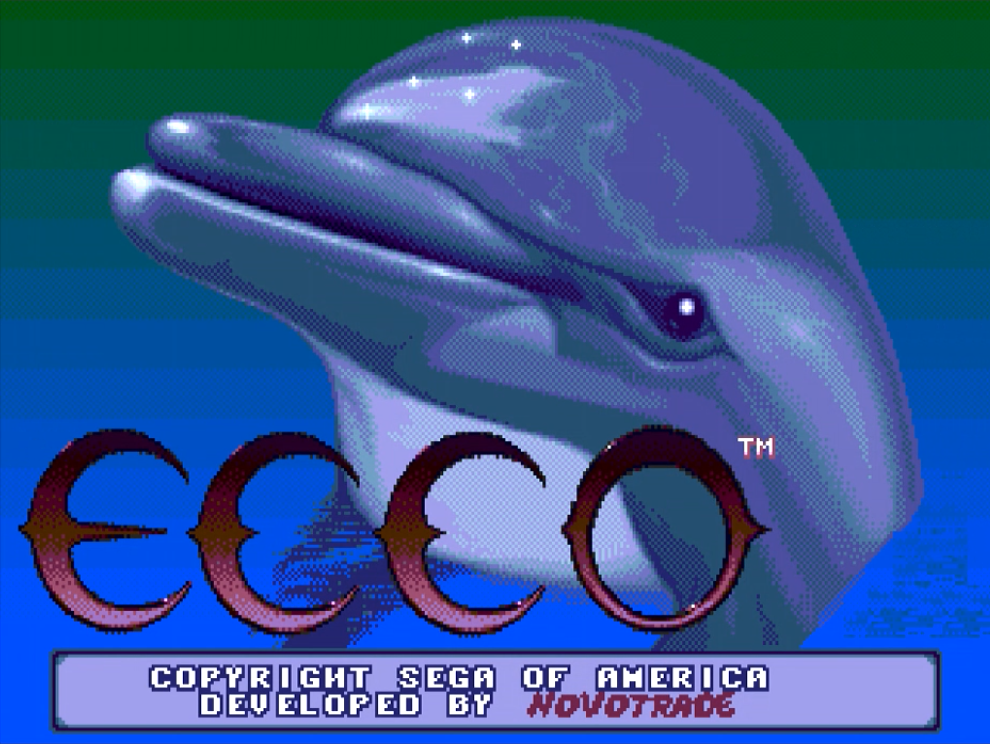 Ecco is a dolphin, and he spends his days speeding through the waves, catching fish and playing with his fellow dolphins. While in the midst such of friendly frolicking the whole ocean begins to shake. Ecco has no idea what’s going on, but when things finally calm he finds that his pod

(family of dolphins) is missing. All alone in the vast ocean, Ecco has no choice but to search for answers. That’s the story of Ecco The Dolphin, it starts off straightforward enough, but things take an interesting turn as Ecco explores the mystery of what happened to his pod. When you do find out just what’s going on you’ll probably be thinking ‘Oh, I didn’t see that coming’, taking on novel ideas for puzzle-action games of the time.

It’s not just the story either, Developers Novotrade (later Appaloosa Interactive) managed to put together a simple puzzle-action game, but to present it in a way that provided a unique experience.

Your average hero walks through a dark forest or jumps up a steep mountain, but Ecco is no ordinary hero. For him dashing through the waves and making film-like leaps out of the water is the only way to go. In fact, you can have fun just darting around, diving out of the water, enjoying the wonderful art that is the Ecco character sprite, there really is nothing else quite like the realism of Ecco on the Mega Drive. Once you’ve had your fill of aqua-acrobatics you can get into the meat of Ecco, exploring the seas. Each level of Ecco is an underwater maze of dangers and glyphs (crystals). Ecco will be confronted by glyphs that block his progress in each level, so he’ll have to do a little exploring, dodging sharks and jellyfish among other dangers, to find the corresponding key glyph. Once you’ve found the right glyph (which isn’t hard, there’s usually only one pair in each level) Ecco will receive a new song that can be used to move on. You’ll have to keep an eye on your air as well as your health while you dive the great ocean depths since dolphins don’t have gills. So keep your eyes peels for air pockets as you search the many passages that litter the seas, and occasionally lead a lost dolphin back to his pod.

Ecco himself controls well, but Ecco can’t stop in a blink when going at speed or turn instantly, his is swimming after all, so it might take a little getting used to for some, but I found a certain intuitiveness to the movement. Novotrade also thought about difficulties in exploring more complex levels, so they included the ability to see a map of the immediate are with Ecco’s echolocation by pressing and holding the A button.

For a little helpful piece of advice, make sure you help any dolphins you come across if you want an easier time playing Ecco.

The music is distinctive and fits in with the feel of things, although I felt as although there wasn’t as much variety as I would have liked. If you’re like me you’ll notice tracks being reused very quickly.

There’s no save function, so either beat the game in one sitting, which you can do since there are unlimited continues for most of the game, or make use of the password system, so get your pen and paper ready.

I’ve already spoken about the graphics, so I’ll just say again that Ecco and the rest of the wildlife look really impressive, while the environments are occasionally repetitive.

That’s really all there is to say about Ecco The Dolphin, it’s not complicated, but it still managed to be different from everything else out there at the time, and to an extent still is today. There might have been many aquatic adventures since that have presented wildlife under the waves with a greater scope, but Ecco still stands out as a game that’s fun, relaxing and surprising all at once. It’s still worth a play and a must have for serious Mega Drive collectors, and on top of that, it’s not difficult to find (as of writing).