A Tale Of Two Jims. 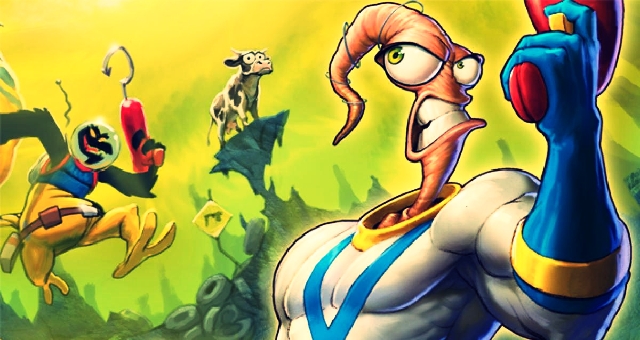 Does anyone remember the Masked Magician? No. Well in a nut shell it was a show from back in the 90s where a masked magician would do a few mind-bending tricks before revealing exactly how said tricks were actually done. It was pretty interesting stuff, and for the time fairly ground breaking, but what, I hear you ask, has this got to do with Earthworm Jim?

Discovering the truth behind a magic trick really makes you ask yourself, how did I miss that? Honestly, spoiler I guess, magic tricks are not really magic at all, and a great many of the tricks that we see on TV are achieved via the use of things like string we’re just really fast hands! I know right? I had a similar moment recently when it came to one of my all time favourite games Earthworm Jim.

See I’ve played Earthworm Jim countless time, it’s cartridge along with the likes of Streets of Rage 2 and Sonic 2 might as well have paid rent for how often they took up residence in my Mega Drive. I even owned a few Jim-themed action figures and tuned into the cartoon whenever I could, though I’ll admit re-watching the show today is a little jarring given how Homer Simpson’s voice is forever coming out of Jim’s face, but I digress.
I thought I knew Earthworm Jim, in fact I was confident I did, however all that changed when I recently returned to one of my all-time favourite platformers all be it this time on the Sega CD.

I didn’t begin my playthrough of Earthworm Jim on the Sega CD completely blind, I had heard many stories over the years describing this special edition of Earthworm Jim as the definitive way to play Jim’s first and best adventure. The CD quality soundtrack was unmatched on any other platform apparently, and the visuals, far cleaner and crisper than either the SNES or MegaDrive could ever hope to achieve. Claims I found to be very much true as I made my way through New Junk City, the game’s opening stage, and then I found a toilet.

Yes you read that right, I found a toilet in New Junk City but that wasn’t all, this toilet then led me to an entire new bonus stage smack dab in the middle of New Junk City. I hadn’t had to enter any combination of buttons or seek out this extra, it was simply right there in the middle of the level and I was thrilled for the first time since the Jim went 3D to be actually playing new content, but that was just the beginning.

As I continued on through one of my favourite games of all time I found so much more we, SNES & MegaDrive players have been deprived of. For instance; countless additional frames of animation which truly do bring an already vibrant set of worlds and characters found in the Earthworm Jim universe just that little closer to life, much in the same way a whole host of brand new quips from Jim himself do.
Top that off with new and extended levels, an additional weapon and a fully realised soundtrack and honestly I feel a little short changed by every other version of Earthworm Jim that isn’t on the Sega CD, a bit like those who the masked magician back in the 90s ruined magic for.

Don’t get me wrong, I still adore Earthworm Jim, the Sega CD version unsurprisingly increased my admiration for this run and gun masterpiece, but I would also warn Jim fans new and old that there is really only one way to truly appreciate Earthworm Jim’s original adventure and that is via the Sega CD, every other port and incarnation are the diet Coke equivalent to this endearing classic.