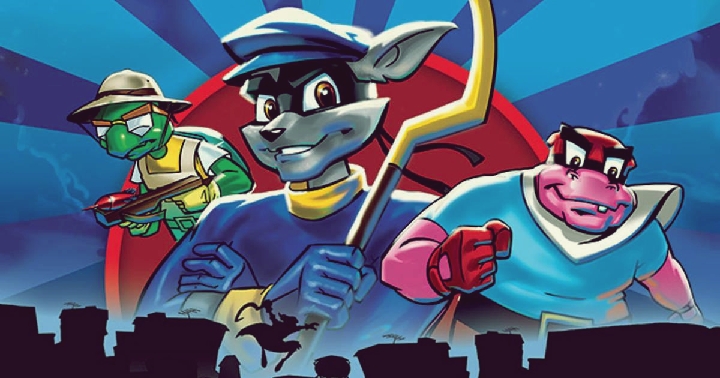 I can distinctly remember the shift the platform genre took when transitioning from the PlayStation 1 to the PS2. Gone, or at least changed beyond recognition, were the likes of Crash, Spyro and everyone’s favourite skull headed knight Sir Dan and in their place suddenly appeared the likes of Ratchet, Jack and Sly, a new breed of platform star who were altogether edgier, cooler, more grown up even and yet of little interest at all to me.

In all honesty I attribute my utter lack of interest in this new wave of platformers to the saturation of the market a generation before. The Nintendo 64 was awash with 3D platformers, some genre defining, some not so much. The PlayStation also played host to more than it’s fair share of platformers, again some wonderful and others not so. Then, is it really any wonder by the time the PS2 rolled around I was all platform out.

Skip ahead a few years to present day and I find myself with a PlayStation Vita in hand and the bubble icon of The Sly Cooper Collection bobbing up and down on my screen.
Sly Cooper, as mentioned above, was one of the new wave platforming mascots who failed to catch my eye back in 2002, but today the promise of a 3D platformer crafted in the vein of a Saturday morning cartoon show more than grabs my attention. The luxury of being playable on a portable console the quality of the Vita is the icing on the cake, and so I tap the bubble.

Without question, I think what took me aback most following my first sit down with Sly Cooper and the Thievius Raccoonus was just how well realised visually the game was; the fact is Sly Cooper is 20 years old, and while a handful of visual improvements have indeed been made to the PS Vita version of game it’s the art direction and colour palette choices have significantly helped the Sly Cooper series defy its age. Clearly developers Sucker Punch knew exactly what they were going out to capture with Sly Cooper, a playable cartoon, and that’s exactly what they achieved.

Visually striking without question, Thievius Raccoonus does however show its age in regards to the game’s actual gameplay, which feels very much of its time; limited lives, deadly environmental obstacles at every turn, malicious enemy placement. Honestly, at points Sly’s world feels as if it is difficult for the sake of being difficult, or perhaps the difficulty is padding, a clumsy tool implemented by a developer in hopes of creating artificial length. Playing the same difficult section 15 times over will indeed stretch the game out somewhat, but to will it stretch the player’s patience too.
If you are easily frustrated and a controller thrower, Thievius Raccoonus might be better played on the PS2 or PS3 being that controllers are much cheaper and easier to replace than fragile PS Vitas.

That’s Sly’s greatest strength however, in spite of the dodgy camera and cheap do-overs the desire to persevere just a little bit further, to see just a little more of this wonderfully madcap world and to meet another of the raccoon’s endearing rogues gallery is always there.

Like an episode of Rescue Rangers or Darkwing Dark, you tune back in every week despite knowing the episode’s ultimate ending because more than anything you want to see how Chip and Dale, or Drake are going to get there and who they’ll cross paths with along the way. Sly Cooper and the Thievius Raccoonus achieve this and so much more, making the game worth the time of both platforming connoisseurs and 90s kids combined. Oh and I haven’t even touched on the inclusion of Sly 2: Band of Thieves and Sly 3: Honor Among Thieves (included on this collection as a download code only, beware if buying pre-owned) which are also bundled into this outstanding collection. But I came here to talk about discovering Sly Cooper, and I’m thrill that 20-years on I have.