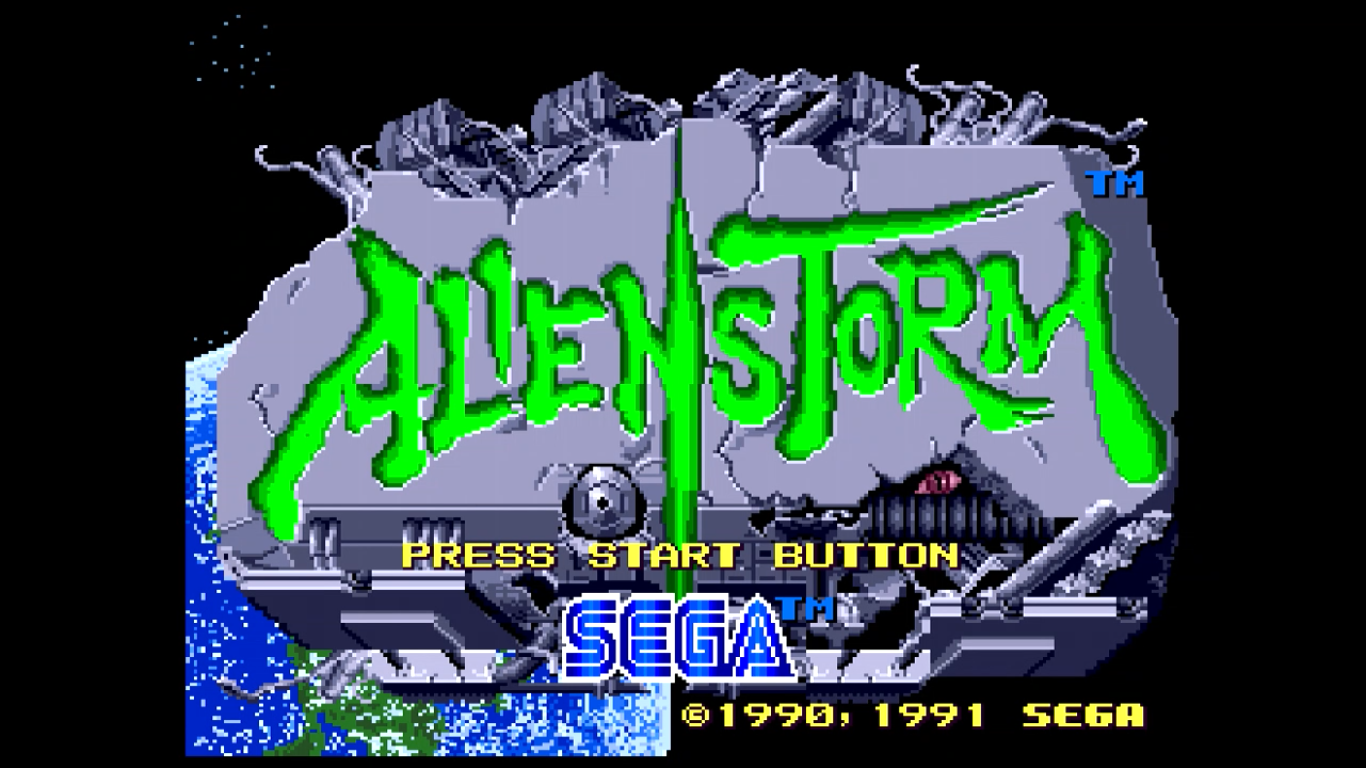 In 1990 Sega released Alien Storm in arcades, and for many it was something like a science fiction themed Golden Axe. Then in 1991 Alien Storm made the inevitable move to Sega’s home consoles, as so many great Sega arcade games did. But how good is Alien Storm? Is it another glorious game of galactic proportions from Sega, or is it best left out in the cold depths of space?

Alien Storm is a scrolling beat ’em-up familiar to anyone that’s played the genre before. For those new to them though, Alien Storm sees you walking across the screen from left to right, fighting off evil alien swarms with combos, jumps and evasive rolls.

With that quick introduction out of the way, let’s get on to the graphics, and things in this department are a definite plus. The three playable heroes (a Karla, Gordon and Scooter) have nice sprite work, and the variety of their weapon animations for combos is impressive. The aliens are fittingly grotesque, with faces in places that they shouldn’t be, and clear, evil intent expressions, although you’ll see palette swapping used plenty to make up for the small number of designs. The backdrops aren’t outstanding but they do their job, and you’ll find there’s some decent variety here too, just like the weapon animations. This isn’t true everywhere, the citizens running for their lives look especially rough, but these are the exception rather than the rule.

Now let’s get onto the thing that matters most about a beat ’em up game from the arcades and that’s gameplay. As written above, the basics of any beat ’em up are here, and aspects of what you might be familiar with in Golden Axe are here too. Specifically you’ll need to approach enemies with two things in mind, that they will try to manoeuvre around to attack you from behind and you need to be careful of counter attacks if you miss time an attack. Walking right into enemies without any concern will see you taking damage from the swarms, so you’ll need to be willing to create some distance when necessary with the roll button–a handy dodge move that will get you out of some tight spots.

The three characters themselves play identically, with mostly just cosmetic differences between them, much like Golden Axe. All three have whole screen damaging special moves that will deplete your character’s energy when used, also just like Golden Axe, but unlike Golden Axe if you run out of energy you won’t be able to perform any weapon attacks; reducing you to only the short range and weaker barehanded attacks.

Each level is short and there isn’t much complexity in the general combat, but Alien Storm has a couple of secret weapons up its sleeve. Besides these short levels you’ll also be playing through two more styles of stages occasionally. The first of these are shooting range areas, complete with destructible elements. By the way, you will want to destroy these elements because you’ll find health and energy bonuses hidden all over the place. These shooting ranges are simple but a fun deviation, and the change to a first-person perspective gave Sega a chance to give the aliens some more detail.

Then you have a third style of level–the runner. In these segments your character will run continually and your weapons will become true long range projectiles, turning Alien Storm into something like a scrolling shooter. Just like the shooting range levels these are simple, but its another feature added into Alien Storm that add to the fun, and both these departures from normal gameplay help to differentiate Alien Storm from Golden Axe, as well as most scrolling beat ’em ups of the time.

There’s a lot that I like about Alien Storm, similar to Golden Axe but with a novel science fiction theme, varied gameplay and well designed aliens, even if they are repetitive.

So are there problems? Well there’s two major issues, Alien Storm is short. You might very well beat it in your first sitting, and in under an hour. The second issue compounds things, and its that there’s not much reason to come back to Alien Storm after you’ve completed it unless you really enjoy it. There is the option of 2 player if you want to have some fun with a friend against the alien menace. There’s also a versus mode, but the gameplay doesn’t really lend itself to player vs. player combat, and there are much better options on the Mega Drive if you are looking for some versus fun. Finally you have ‘The Duel’ which is a gauntlet mode of sorts, pitting you against a series of enemies with only one credit to make it through. Be sure you only have one controller attached to if you want to try the duel mode, it won’t be selectable if there are two controllers connected.

The good news is you can do something to help with the lifespan of Alien Storm since it was bundled along with Super Thunder Blade and Super Monaco GP on the Mega Games 3 cartridge, this was only released in Europe however (which is how I played Alien Storm).

So there we go, Alien Storm is a fun game that perhaps doesn’t quite live up to its potential. If you’re a fan of the genre or a fan of Sega’s arcade games then it’s definitely something you should consider picking up. And since the Mega Games 3 bundle is actually cheaper than Alien Storm on its own (as little as £10) as of writing, I would say its certainly worth a look even if you’re not.

For Stage–Select, this was Ed.