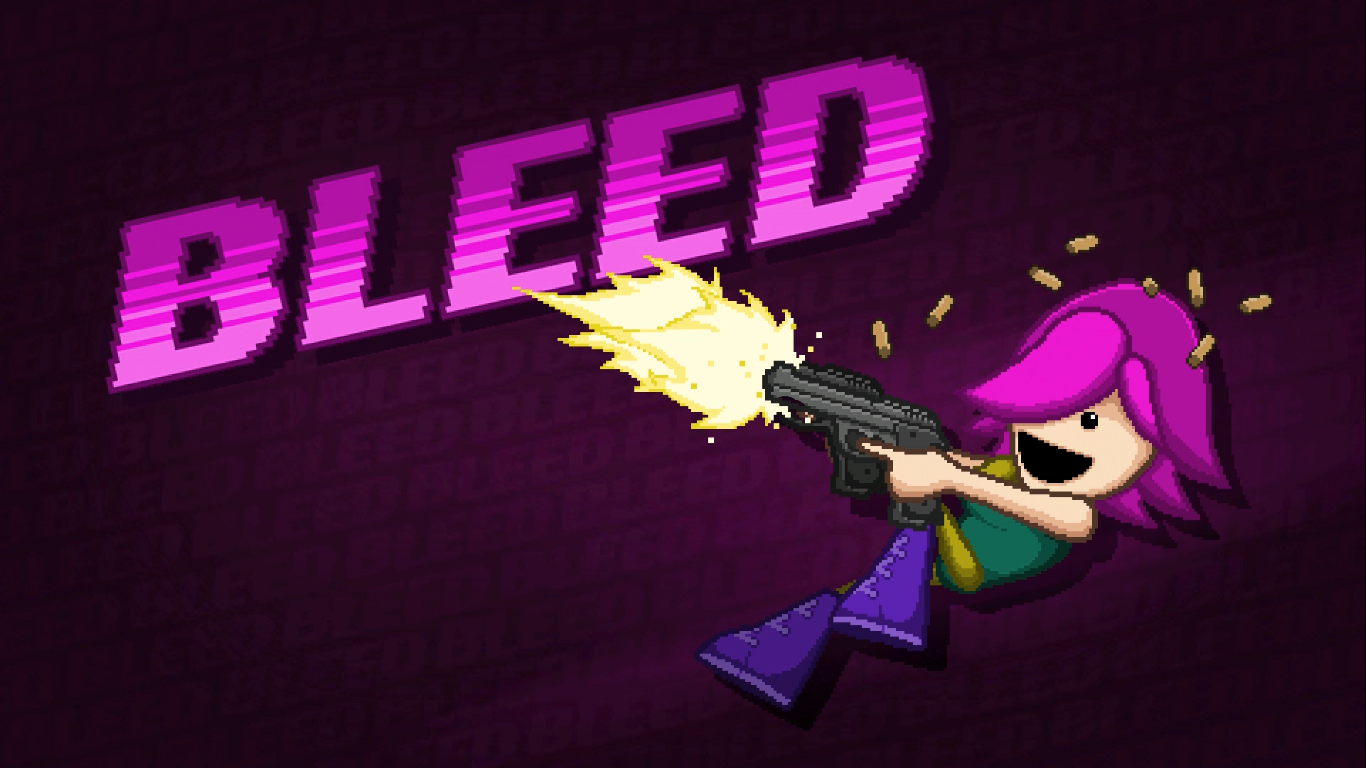 Welcome to the second review of a game in the Play-Asia ‘Exclusives’ range, and this times it’s the Bleed collection. This first part will deal with the first game in the collection, Bleed, keep your eyes open for Bleed two, coming soon.

So Bleed, the 2D shooter that’s available for digital purchase on the Xbox One, Steam and Switch, but we’re taking a look at the physical version released on the PS4, published under the Eastasiasoft label, sold through Play-Asia and developed by Bootdisk Revolution.

You could say that Bleed is a retro shooter on modern consoles, that would sell me on the game and it would make this review a lot easier, but it would do a disservice to Bleed and the unique character of the game. That’s the problem with comparisons, you might get an idea of what a game has to offer, but this is one of those times where the idea you get is a little shallow.

Bleed is about a girl named Wryn, and Wryn is a big dreamer. She wants to become a hero, but not just any hero, she wants to be the greatest hero in the world. To make her dreams come true Wryn has written up a hit-list of all the top heroes and sets out to take them down. You’ll find more depth in the ketchup splodge next to you chips (or fries for our American readers) but it’s got character, a comical character that does just enough to set the scene for what you really bought the game for, the gameplay.

Like I wrote above, Bleed is a 2D shooter, reminiscent of classics of the same genre. You can think of games like Contra, and what would today be a twin-stick shooter, Smash T.V and put them together, then add a little bit of Max Payne slow motion and you’ve got an idea of the elements that you’ll be juggling in Bleed.

Using the left stick to move and holding the right stick in the direction you want to shoot, you’ll find yourself running and gunning through a handful of stages, taking on enemies and leaping over gaps. The controls are as smooth as the gameplay, but one thing that was a little jarring is the jump and aerial boost controls. When you want to jump you press the R2 shoulder button, and can then press it a further three times to boost in any direction mid-air. What’s strange is using the shoulder button to jump. That’s completely understandable, your right thumb is perpetually holding the analogue stick to fire so the most natural choice would be a shoulder button. It’s just unusual to be pressing R2 to jump. It’s not the end of the world, and after a little practice you get used to it, just something that I found a little odd at first. Back to the game and where you find Bleed’s unique points. Gameplay is heavily geared towards the movement of Wryn, and because of that you’ll find that the camera is often zoomed out, giving you a much larger look at the area around you, with high ceilings, letting you buzz across the level, slow-motioning through bullets while launching rockets at you enemies. You can pull off some really cool dodges while bouncing bullets with the katana, and you’re going to need to because Bleed is hard. You’re going to lose a lot in Bleed, but that’s okay. Every time you lose you can take the opportunity to learn more about the level or boss you lost to, memorising attack patterns and dangers so next time you’ll be ready. That brings me to something that I’m really happy about with Bleed, checkpoints. Whenever you lose you’ll find yourself restarting at one of the checkpoints that are generously distributed in the stages. They help to balance out the challenge, so even if you lose you know you can start up close to where you were again, very quickly.

I was never bored or frustrated playing Bleed, the game is short, but the levels are meant to be played multiple times, and there’s plenty of incentive to do so and that helps a lot. There’s also an in game shop to buy power-ups and new weapons, and there are unlockable characters that play differently enough from Wryn that they actually make for a different approach to gameplay. Replaying levels at higher difficulties also add extra enemies and even changes the properties of some of the bosses attacks. Because of all this I was happy to revisit levels and ended up completing each one on every difficulty. On top of all that there’s a challenge mode for people who want to really test their skills against the bosses, and a local co-op mode to have some fun with a friend. Like I wrote, all helps to remedy the length of the game, but I’m not sure if it does quite enough for me to overlook the speed at which you can complete it, especially if you’re not the sort of person who is bothered to unlock everything.

So there’s a lot of good to say about Bleed, and there will be more when I review part 2, but I’m still aware that this isn’t a game for everyone. This is a niche sort of game. If you like the idea of memorising attack patterns and properties, and replaying levels multiple times to get some longevity out of a game than Bleed is for you. It really is sort, and the skill level required for the game is above average, offset with checkpoints sure, but the game does demand a degree of skill that you don’t find in the average action game. If that sort of challenge doesn’t sound like it’s for you, maybe you should steer clear of Bleed. If the length puts you off then the physical collection might be for you, and of course you keep your eyes peeled for my review of the collection as a whole in part two. As for Bleed as a stand alone game, it’s fun, it’s smooth, it’s challenging, but it’s short, maybe a little too short on it’s own for me.

For Stage-Select, this is Ed, signing off.