House Of The Dead remakes. 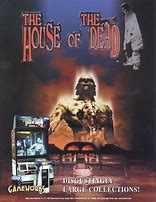 Forever Entertainment, the studio who is currently doing work on the Panzer Dragoon and Panzer Dragoon Zwei, have announced that they have signed an agreement with Sega to develop remakes of House of the Dead 1 and 2.

Forever Entertainment were unable to provide any details beyond that, but just the news that the classic Sega Titles are making a comeback will surely brings smiles to more than a few faces.

Now let’s just hope we hear news of remakes for the rest of the mainline series.