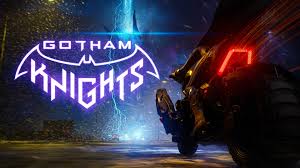 The next Batman game to come out of WB Games Montreal has been revealed, and it might not include Batman.

Gotham Knights will see players take control of Robin, Nightwing, Red Hood and Batgirl in a crime-infested Gotham City (is there any other kind?) in either single player or co-op action.

The announcment has come with both a reveal trailer and a gameplay trailer.

Gotham Knights is due for release in 2021, and will be cross-platform for the PS4 and PS5, Xbox One and Series X and also PC.