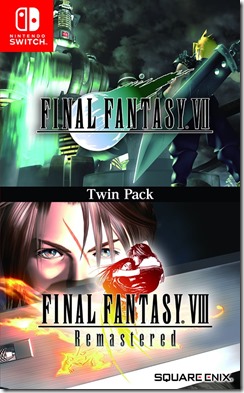 Playasia got our hopes up a little while ago when we reported about pre-orders they were taking for a physical copy of Final Fantasy 8 Remastered, only for Square Enix to dash those hopes with a post on their official site stating the game would only be digital.

Well maybe Square Enix have actually decided to listen to their fans, at least in Asia By a Facebook post, Square has announced plans to release a physical version of Final Fantasy 7 & 8 Remastered, bundled together as a twinpack for the Nintendo Switch, but only in the Asia region.

There are no plans announced yet for a Western release, but there will be English support for the Asian release, and who knows? Maybe Square Enix will eventually release the games in English speaking regions as well.

I certainly don’t think there would be any difficulty in selling a twinpack, and maybe even a triple-pack with Final Fantasy 9 included?

One can only hope.