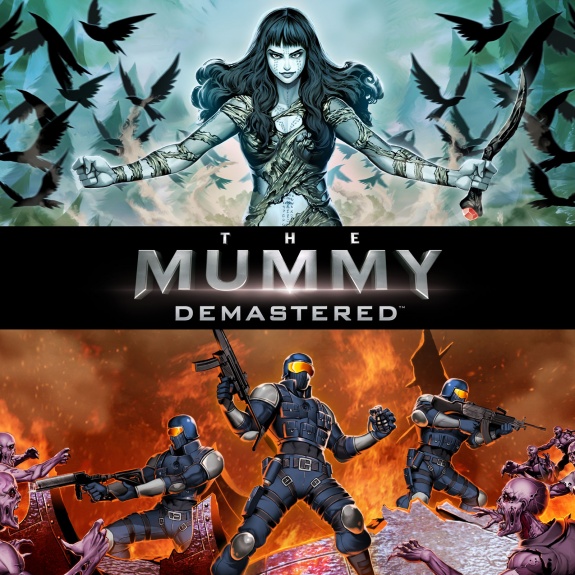 Hello and welcome to the first every Nintendo Swich game review, and for starters it’s The Mummy Demastered, digital release for the Nintendo Switch that’s also available for the Xbox One, PS4 and PC, and developed by WayForward Technologies, they’re the people behind games like Aliens Infestation and the ludicrously priced Shantae for the Game Boy Color.

In The Mummy Demastered you play as a ‘Prodigium’ agent sent off to stop the evil mummy princess Ahmanet before she covers the world in sand, zombies and giant insects. The game is licensed from the 2017 movie ‘The Mummy’, now I haven’t seen the film so I can’t tell you if the game follows the film’s plot, but the trailer shows a lot of Tom Cruise and unless I missed it he doesn’t feature in this game, so I’m willing to take a guess and say no, the two plots aren’t particularly close. That’s probably a good thing though, the story for The Mummy Demastered isn’t particularly strong but it doesn’t need to be, it does its job but the meat of this game is it’s gameplay.

It plays in the style of a Metroidvania title though I would say closer to the vania than Metroid portion even with no real melee combat involved. If you know what comes with the Metroidvania genre then you’ll already have a good idea of what to expect here. You’ll be making your way through levels with enemies all around you, having to fight off bats, rats, crows and more with an arsenal of firearms, these include an assault rifle, shotgun and a flame-thrower, along with various explosives. There are platforms, moving and stationary for you to jump on and big bosses for you to fight. There are also power-ups to you health and ammo capacity, though some of these will require backtracking after unlocking new abilities if you want to get your hands on them. It’s in this aspect that The Mummy Demastered shows itself to be more Castlevania than Metroid with

power-ups that are much easier to find and quicker to return to than in Super Metroid, thanks to a very easy to navigate map and helicopters that can fly you back to a few set points you’ve already been to throughout the game.

The combat is old fashioned fun, challenging but not unfair with controls that are intuitive and responsive. The 2D sprite aesthetics and music are high points as well, with character sprites moving fluidly and the music sounding like it came from an 80s horror film. Touches like an overturned ambulance early on in the game that looks like a London ambulance, in keeping with the game’s setting, is the sort of things I’m talking about when I praise the work that’s gone into the game’s presentation. Really good stuff.

It took me 4 hours and 33 minutes to complete the game so we can round that up to 5 hours. In that time I found most but not all the power-ups and most but not all the 50 relics hidden throughout the game, with that included you could probably add another 2 to 3 hours of gameplay without using a guide for help. One other thing worth mentioning is the death mechanics. Like you might have seen in a game like Dark Souls, when your character dies he becomes a zombie thrall of Ahmanet and any weapons he was carrying at the time of death time stay with him. To get back your gear as well as you power-ups you’ll need to face off against your zombie agent and take him down. I’ve read some people complain about this mechanic since it means you could find yourself needing to traverse a particularly tough area later in the game with little health and weak weapons only to then have to face off against you’re former self who still packs some of your heaviest punch. Now I can’t really attest to this problem because my agent never actually died during my playthrough, but for the sake of thorough investigation I made a copy of my save file and allowed myself to lose to some spear wielding zombies, and I can say that I could imagine this death mechanic causing some people problems if they’re unlucky enough to fall in a bad place.

As far as performance I saw no problems with slowdown during play, though oddly the game did crash and force me out to the main menu once I had collected my old gear from the zombie agent. I loaded my save back up and went through the process again and the second time found no problems.

So overall what do I think? Well for the price I have to say no. The game is good fun and definitely one of the best offings on the Switch eshop, but for me the price of £17.99 just isn’t justified with the short time it takes to complete the game and the fact that we’re dealing in a digital medium. That’s my biggest reservation about The Mummy Demastered when it comes to a recommendation, if you’re like me and you’d always prefer a physical game over a digital one then I can’t recommend a purchase even though I can praise so many of the game’s good points. On sale at £15 or less sure, but at closer to £20, I’m afraid not.

Ultimately it’s down to you if you think it’s worth the money, if you’re someone who doesn’t give a hoot about digital versus physical releases than I would say it’s definitely worth a look, and I can’t say I didn’t have fun playing what is another very good WayForward title. I give The Mummy Demastered 7.5 out if 10.