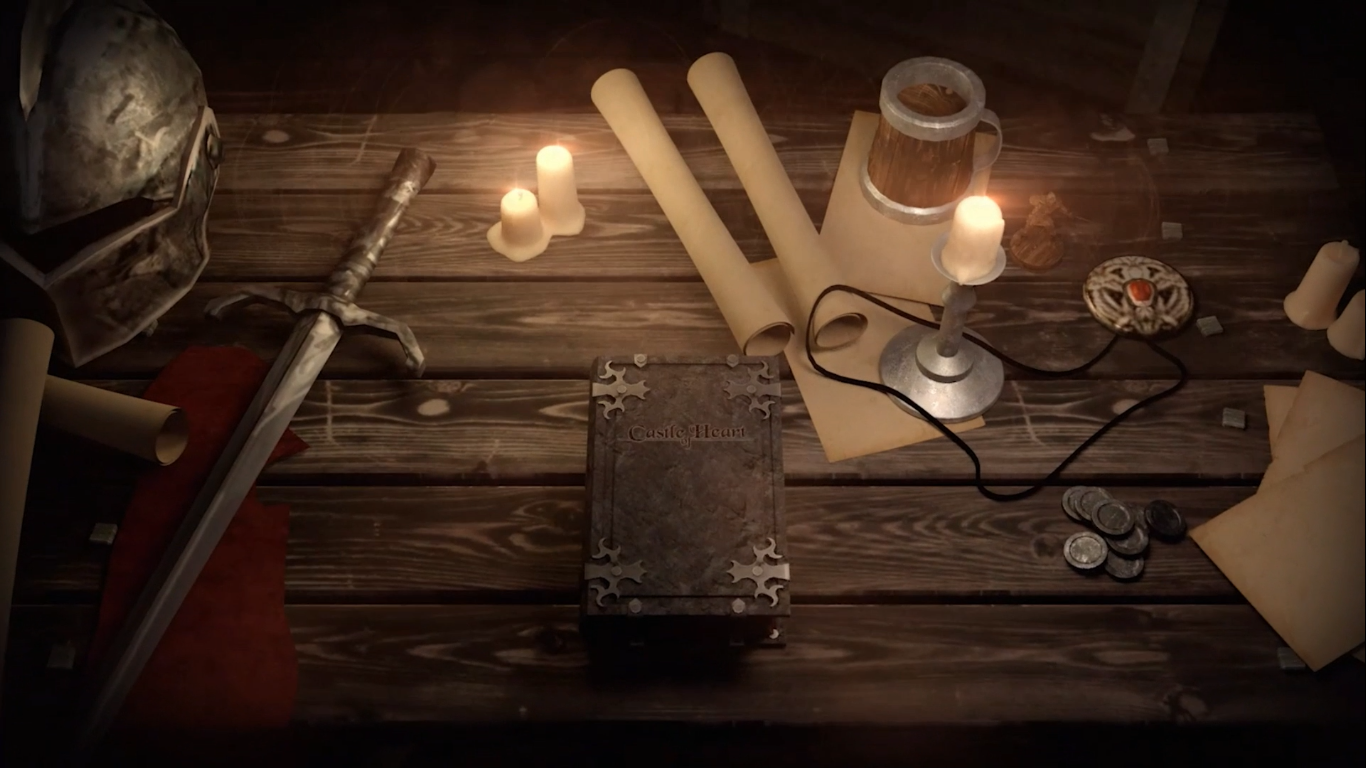 So here we are with another review for a Nintendo Switch game, and this time it’s Castle of Heart from independent developers 7Levels, but does this digital download title capture hearts or just break them?

The game is presented like a story book, and it’s a simple story. You’re a knight facing off against an evil wizard. This wizard kidnaps your beloved and turns you and your home town to stone (what a jerk), but the tears of your beloved as she’s whisked away cures you of your petrifying curse, at least partially. What’s left for you to do but hunt down this evil menace and save the girl? A very simple plot, and you’re going to read that word a lot, because that’s what Castle of Heart is, simple. Simple story, simple gameplay, simple level design, everything is simple. That’s not necessarily a bad thing though, so let’s get on with the gameplay.

Castle of Heart is an action-platformer that brings classic gameplay to contemporary gaming. As the knight you’ll find yourself in a 2.5D world, running from left to right in linear fashion, usually making life or death jumps over pits, and cutting down enemies with a selection of primary and secondary weapons. By default you always carry a sword in your left hand, the problem is it’s about as effective as slapping an angry Rottweiler with a raw steak thinking that’ll calm it down (it won’t so don’t try it). So you’ll want to pick up one of the other primary weapons scattered throughout the levels as well as dropped by enemies to carry in your right hand. These range from other swords and maces, to projectile weapons like crossbows and spears. Now technically all weapons are projectiles save for the sword in your left hand since all weapons can be thrown, some, like the torch, even have special properties, such as poisoning enemies on contact, but generally you’ll want to hold onto a useful second weapon so you don’t cripple your damage output. That being said, even with the decent size of weapons, you realize very quickly that all the weapons feel the same. They all have the same animation, and they all play out with the same three hit combo (X button x3). The special effects are decent and the weapons do look different, and they deal different amounts of damage. It’s just a little disappointing that in a game as old as Ghouls n’ Goblins you have a selection of weapons that all work very differently, but here you have in most cases a lot of the same thing just with slightly altered effects. Secondary weapons are the same story, with all of them but one being variations of bombs, some fire, some ice and so on.

If you’re not swinging swords and throwing bombs though, you’ll probably be engaged in one of the many chase segments you that you’ll be treated to in the game. These take of form of some danger (like boulders) falling behind you as you hurtle down a steep incline, avoiding the many different dangers that someone has carelessly left in your path. These are the place you’ll almost certainly lose at once or twice as you memorize what’s coming up and when, but these segments are a nice inclusion that break up the combat. In fact my only real complaint about the gameplay is that I occasionally found that enemy attacks can halt your knight as he tries to perform an action, so you might be holding block only to what the minion in front hammer away at you while the knight does nothing. It’s not the worse thing in the world, just a little nuisance until you’re used to it.

On top of weapons there are five purple gems to collect in each level. Like I wrote above, the knight had been curse with petrification. Because of this your life bar is constantly draining down, finding all five gems will halt the petrification in that level. It’s a nice idea but I didn’t find the threat of your life bar running down too big of a problem to begin with. Not only do you get a portion of health back from every enemy you beat, but there are health pick-ups as well. On top of that your health is restored at every check-point, which are generously distributed throughout levels. I’m not knocking it, I actually like the gems, it’s something extra to look out for while you dispatch the latest horde of enemies, just that I don’t think it works quite the way the developers thought it would. It’s worth saying that collecting the gems does have an effect on the ending you’ll get. You won’t find deep gameplay with Castle of Heart, it’s just press the attack button a lot, the block button, then repeat. You will have to block though, and sometimes jump, because enemies will kill you if you just stand there trying to absorb damage. This is especially true of bosses, so you need to take a little time and learn their attack patterns. Again, these aren’t bad points, their actually the opposite, just know that you’re getting into a game that really is a pure action-platformer, one with it’s own identity that I very much appreciate, but it’s not trying to be anything else.

I’m fan of Castle of Heart’s presentation, in a sea of ‘pixel art’ and other 2D indie games it’s nice to see 7Levels putting together a competent 3D showing. The graphics won’t blow you away, but they fit the feel of the game. The knight feels like he’s wearing a suit of armour (which makes his floaty jumps feel a little strange at first), and weapons sound like they hurt. The idea of a story book style level select is nice too. It’s the sort of thing that goes well with the games medieval setting.

That’s about does it for Castle of Heart. It’s a fun game if you’re looking for some old fashioned gaming fun, simple sure, but it doesn’t need to be much else. You’re a good guy fighting the bad guys, with grit and determination, and some bombs. One reservation I do have is the price, at £13.49 (as of writing) you’re not getting much content. You can clear the game and collect all the gems in roughly five hours, depending on continues of course, and for me that’s a little steep, especially for a digital game. What I would say is wait for a sale, that when I downloaded it, at for what I paid it was definitely with it.

At the discount I bought Castle of Heart for, the game would be a 7 out of 10, but the full price being what it is I can’t recommend it. At £10 maybe, at £5 definitely, but at nearly £14 it’s just a touch too much. If you’re looking for a fast fix of classic fun and don’t mind the price (or digital) then take a look, for everyone else what for it to go back on sale.