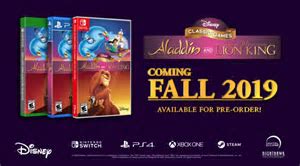 If you were to make a list of the best Disney licensed video games then the 16-bit Aladdin a Lion King games would be right near the top, along with the Mickey Mouse Illusion series.

Well now old fans a new will get a chance to enjoy Aladdin and The Lion King, as the two latest games to get the remastered treatment. If that weren’t enough, both games will be available in one physical package. The game promises ‘multiple versions’ of each title, moreover, players will be able to listen to the popular Disney soundtracks for the games and watch behind-the-scenes footage.

The two- in -one (and more if you count each version of the games on here) will have its physical launch on October 29th 2019 for PS4, XBox One, Nintendo Switch and PC, and you can see a trailer for the game here.

It’s worth mentioning that the two-in-one pack has a ‘Disney Classic Games’, so this might just be the first of a classics line that Disney is planning, if Aladdin and The Lion King sells well of course.