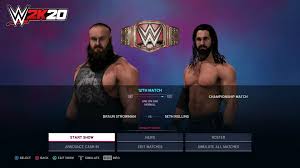 WWE 2K20 has a lot of well-documented problems, partly due to the departure of long-time developers Yukes. The poor impression of 2K20 as well as difficulties caused by the COVID-19 outbreak was probably the two major factors leading to the cancellation of 2K21. Normally a yearly-released sports title, the gap between 2K20 and what will now be 2K21 (presumably) might actually prove a positive outcome in the long term, giving Developers Visual Concepts more time to work on the title. But the story does not end there. 2K has announced a new WWE game called Battleground, a less realistic presentation that is focused on fun according to 2K.

You can see the trailer for WWE Battleground here.