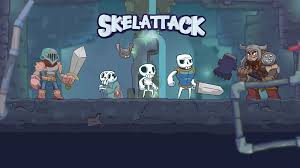 Konami is back! In a way, with Skelattack. You probably missed it but Konami has just released a new, digital only title(for the moment at least), called Skelattack that’s developed by Ukuza. This is part of Konami’s new strategy after the company saw another year of profit increases from digital sales.

It might be a modest effort when compared to Konami at their best in the past, and it’s not an

in-house product, but who knows, maybe this will be a sign of things to come and Konami might just start showing a proper interest in video games again.

Skelattack is available on the Nintendo Switch, PS4, Xbox One and PC through steam and you can see a trailer here.