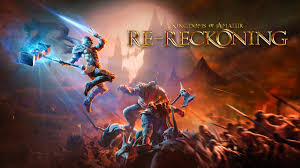 Kingdoms Of Amalur: Reckoning was well received and well hyped but never really achieved the commercial impact that either would have suggested, and some (on the internet) even say that contributed to the bankruptcy of developers 38 Studios (though it seems some fiscal dealing involving a state loan was actually behind the closure).

Moving to the present and THQ Nordic now own the rights to Amalur, and it’s to become the latest title that the publisher will be reviving in remastered form.

Called Kingdoms Of Amalur: Re-Reckoning, fans old and new will get a chance to play the game which had Grant Kirkwood (Rare), Todd Macfarlane (Spawn) and Ken Rolston (Elder Scrolls) on its original staff. You can read the Twitter announcement here.