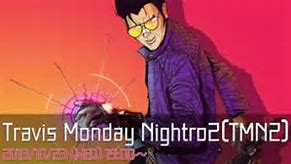 At an event in Japan Suda51 (No More Heroes/Killer 7 and more) and Swery65 (Deadly Premonition/Spy Fiction and more), two games developers with proven track records for make different but good (and in some cases great) games, have revealed a new secret project that the two are collaborating on.

The game is called Hotel Barcelona, which is described as a horror game and will be published by Devolver Digital.

The event is being streamed over Youtube as of writing and can be viewed here. There’s a lot of Japanese but some English interjections from the translator if you’re interested.

There’s hasn’t been any details on price, release date or platforms as of writing, but with the quality of Suda’s and Swery’s portfolio, Hotel Barcelona is a game worth keeping an eye on.