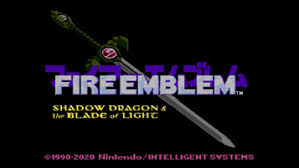 There’s been a lot of anniversaries in the games industry recently, what with Mario and Sega both having celebrations of one kind or another, and now it’s Fire Emblem’s turn.

To mark the 30th anniversary of the franchise Nintendo has announced that the original, first game in the Fire Emblem series is to be released on the Nintendo Eshop, as well as a physical, special anniversary edition.

This will be the first time the original version of Fire Emblem Shadow Dragon will be made available to an English speaking audience officially, but a remake of the game was release to the West on the Nintendo DS.

Fire Emblem: Shadow Dragon and The Blade of Light will release for Switch on the 4th of December, 2020, but will only be available digitally until the 31st of March, 2021. You can view the UK product page here and watch the announcement trailer below.