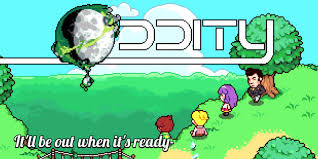 A fan-made tribute sequel to the EarthBound series of HAL Laboratory and Nintendo RPGs originally called Mother 4 has had a name change to Oddity. This is probably a shrewd move given Nintendo’s history with fan-made games and mods of Nintendo owned intellectual properties.

The game has been in development for several years now, and there’s no release date available yet, but a new trailer was released along with the name change, and the game is looks very promising.

You can see the trailer here.