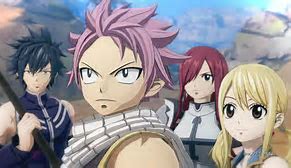 It was recently announced that Fairy Tail, the popular manga and anime, is going to see a video game by Koei Tecom and Gust (Atelier series). When the announcement was made earlier this month we didn’t really get too many details. Now though, thanks to the Tokyo Games Show, we have a little more to discuss, as well as a new trailer that you can see here.

Here’s what we do know: the new Fairy Tail game will appear on the Nintendo Switch, Playstation 4 and PC, will be a ‘command based’ JRPG, will include 10 playable characters and that the guilds that are so important to the Fairy Tail source material will feature heavily in the game.