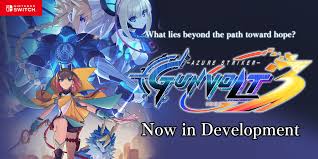 The announcement was made during the Japanese Event BitSummit Gaiden, and while there isn’t much information as yet other than a Switch release, though previous games in the series have found their way onto just about every games-platform either digitally or physically, so hopefully we won’t wait too long to hear that

ASG 3 is heading everywhere with a concrete release date to boot.

Until then you can watch a trailer for the game on its official website here.