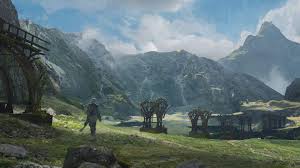 As part of the 10th anniversary for NieR, during a livestream, it was announced that there will be something of a remaster on its way. Remaster might not be quite the right word though.

The term ‘update’ was used instead when talking about NieR Replicant ver.1.22474487139, an ‘update’ to the Japan only PS3 title NieR Replicant. Replicant itself was an odd game in its relationship to NieR Gestalt (also on the PS3/Xbox 360), which itself has a relationship with the Drakengard series as an offshoot to that series.

But strange relationships involving multiple, sometimes confusing, endings aside, Replicant ver.1.22474487139 will be making it’s way to western shores unlike the original, so those who missed out before will get a chance to play it this time. On top of that Replicant ver.1.22474487139 is going to have new content, so old fans might have a reason to revisit the game.

There is no firm release date yet, but Square Enix has put up as site with a trailer, beyond that we’ll just have to wait for more info soon, and hopefully that someone shortens the name.