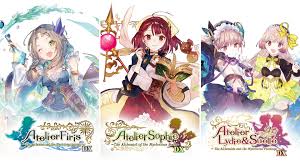 Compilations can be a great thing, especially when it comes to a series like the Atelier RPGs. With so many entries it can be difficult to keep track of them all. Well fans of the series might be glad to hear that a triple-pack of games from the series called Atelier Mysterious Trilogy Deluxe Pack is coming to the Nintendo Switch, Playstation 4 and Steam on the 22nd of April, 2021.

The compilation will be made up of Atelier Firis, Atelier Sophie and Atelier Lydie & Suelle. All three games will be the ‘DX’ versions, and the full titles of each include the word mysterious, hence the Mysterious Trilogy.

You can read the tweet about Atelier Trilogy from Koei Tecmo Europe below.